LMAX Group in the Press 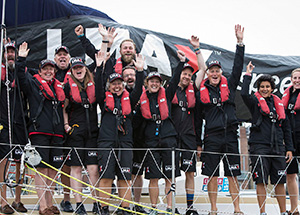 London, 30 July 2016 – Team LMAX Exchange have been crowned the overall winners of the Clipper 2015-16 Round the World Yacht Race. The amateur crew completed the epic eleven month, 40,000 mile journey around the globe and endured some of the most extreme conditions ever experienced in the event’s 20-year history.

David Mercer, CEO of LMAX Exchange, who joined the team for Race 6 of the 14-stage series, the Sydney Hobart Race, congratulated his team: “We are thrilled to be crowned the overall winners of the Clipper 2015-16 Race. I’d like to thank all [58] crew who contributed to this herculean effort with special mention to our [8] round the worlders – the glue that kept our team bond strong throughout. We were very fortunate to have a mercurial skipper in Olivier Cardin and I thank him wholeheartedly for his sailing brilliance.

“The Clipper Race really is an extraordinary event for ordinary people and I congratulate Sir Robin, William and their team for organising a magnificent tenth edition of this unique event. As a sponsor I can’t recommend this event enough as a way to build your brand around the globe and give your clients an experience that money can’t buy. As a race participant I’d tell everyone considering the 2017-18 race to just go for it; it is once in a lifetime and you will experience thrills and hardships that you can’t comprehend but will change you for the better forever.

“Well done to all the teams and crew for completing the circumnavigation. Each and every one of you is an inspiration to us all. Finally we remember Andy and Sarah; your team did you proud.”

With nine podium places and six race wins the LMAX Exchange team topped the leader board for most of the race series, however with only six points separating the top two boats in the final last race there was everything to play for, with twelve points up for grabs.

Olivier Cardin, Skipper of the LMAX Exchange team and the first French Skipper to win the Clipper Race said: “Going into Race 14, we had a six point advantage over Derry~Londonderry~Doire and a short 24 hour-long race to complete. The last stage of the Clipper Race 2015-16 Race was rather risky. On board, the tension was felt during the first few hours of racing. Smiles appeared over time and our happiness exploded as we crossed the line two places behind Derry~Londonderry~Doire.

“We completed the series with six overall race wins and 10 podiums. The result is fantastic, a fruit of labor from a very hungry team. We are all proud to have accomplished this great challenge. The next challenge will be getting used to life back on dry land again.”

The Clipper Race fleet returned to London’s St Katharine Dock on Saturday morning and were welcomed by thousands of spectators who lined the River Thames to catch a glimpse of the twelve Clipper Race teams, whose crew represent 44 different nationalities, in the toughest amateur sailing challenge on the planet.

“This race has been extremely tough,” said Clipper Race founder and yachting legend Sir Robin Knox-Johnston, the first person to sail solo non-stop around the world in 1968-69. “The conditions encountered in the Pacific were the worst we’ve seen in 20 years of running the race.

“I am proud of all of the crew; they have taken on all the world’s most challenging oceans and have been very resilient. They should be justly proud of themselves – whether crossing a single ocean or circumnavigating the entire planet. It is a remarkable achievement. The novices who set out eleven months ago have returned as seasoned sailors.”

LMAX Group has been awarded The Profit & Loss Readers’ Choice Awards “Best Anonymous Matching Platform”. These awards are voted on by the readers and recognise excellence within the foreign exchange industry throughout the previous year. close

LMAX Group has been awarded the Forex Magnates Awards “Best Execution Venue”. The awards are granted to the top firms in their categories and announced at the annual London summit. close

LMAX Group has been awarded The Profit & Loss Readers’ Choice Awards “Best Margin Sector Platform” for five consecutive years. These awards are voted on by the readers and recognise excellence within the foreign exchange industry throughout the previous year. close

LMAX Digital has been awarded the Finance Magnates Awards “Best Cryptocurrency Exchange”. The awards are granted to the top firms in their categories and announced at the annual London summit. close

LMAX Digital has been awarded The Profit & Loss Readers’ Choice Awards “Institutional Digital Asset Platform”. These awards are voted on by the readers and recognise excellence within the foreign exchange industry throughout the previous year. close

LMAX Digital has been awarded the Finance Magnates Awards “Best Institutional Crypto Solution Provider”. The awards are granted to the top firms in their categories and announced at the annual London summit. close

LMAX Group is part of the Future Fifty programme, focused on accelerating the success of high-growth tech businesses. close